Today I’m experimenting with a new category of content where I profile different indie authors and help promote their latest work.  To kick things off, I’m pleased to host Erin Zarro, whose new book, Grave Touched, launched earlier this month. 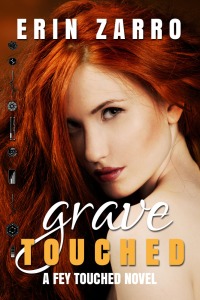 Fey Touched – humans, genetically engineered for immortality and flight, tasked with protecting the rest of the world from rogue Fey…

Grave Touched – dead souls in search of living bodies to possess, especially those who’ve had a brush with death…

When Fey Touched Hunter Emily wakes up in a hospital, she doesn’t know that she was in fact dead. Nor does she know that her lover, Nick, broke all kinds of rules to bring her back. But the grave touched do.

Fey Touched Healer Asha does know that her mate, Joe, saved her when her abilities nearly killed her. And she knows the voices in her head are the grave touched trying to stake their claim. Asha needs Joe’s help again, but unfortunately she’s the only one who believes the grave touched exist.

The grave touched are plotting to take over the corporeal world, and they’re gaining strength. Only Emily and Asha stand in their way – and both are about to be possessed.

Erin was kind enough to answer an array of random questions…

Is there a specific event in your past you can point to as the moment you decided to become a writer, or did you awaken to the calling more gradually?

For as long as I can remember, I have always wanted to be a writer. When I was a kid, I wrote a TON of short stories, and even attempted a novel when I was thirteen. It was terrible, but it was the first serious book I ever wrote.

My grandmother was a writer, too, and she wrote poetry and newspaper columns. So it’s completely in my blood. 😀

Which writers have influenced your work the most?

There are so many! But if I were to narrow it down, I’d say Terry Goodkind and Laurell K. Hamilton (her early work only!). My mom read Goodkimd’s Wizard’s First Rule and bugged me to read it, but I refused because “I’m not into fantasy.” :eye roll: I finally broke down and read it and it changed my entire life. I started writing fantasy then. LKH’s early stuff was so amazing, and she made vampires and werewolves sexy and cool. I did write several vampire/werewolf novels after that, but now I’m focused on other things, like blending science and fantasy elements. 😉

Also Karen Marie Moning’s Fever series. I’ve never read a story more intricate and mind-blowing. Would love to write something like that someday.

If you had to choose between pancakes and waffles, which would you prefer and why?

Big pancake fan here. I just love pancakes, especially with buttermilk and/or something in them. I recently had stuffed pancakes (pancakes layered with cream cheese and apples and topped with more apples and whipped cream) and I’ve been craving them. But alas, not good for the waistline. 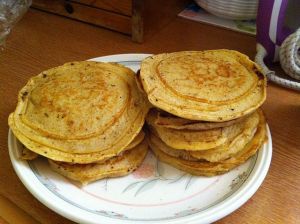 Do you draw inspiration from other media such as music, movies, or the whimsical majesty expressed through the medium of interpretive dance?

Music is a huge inspiration for me. Sometimes it’ll help me figure out a scene, or it will be the soundtrack of a book. I have one book that I’m rewriting currently that is a psychological horror with mind control in it. Queensryche is my favorite band, and I love their concept album Operation: Mindcrime. O:M features a mind-controlled assassin. I swear the book wrote itself to that album. I don’t even remember half of the writing I did. I was in some kind of fugue where the music and my brain melded or something.

A novella of mine is based on the Queensryche song “Take Hold of the Flame.”

I also try to pick a song that’s sort of the theme of the book, and each main character’s theme song as well. Sometimes I’ll listen to a song I picked on repeat. For Grave Touched, my most current release, I listened to a lot of Tool while writing the first draft, and Skillet while revising.

Symphonic metal, which I discovered a few years ago, is my go-to music for fantasy and fight scenes. It is epic and helps me visualize everything.

To help their characters come to life in their own minds, some writers cast them using pictures of actors and models, as well as heroic figures depicted in art. Did you do this with any of your characters?

I typically don’t. It’s a great idea, but my brain works a bit differently. I don’t ever see faces – all I see is a hand reaching out to touch a shoulder, or tears streaming down a cheek or two characters embracing. It’s completely weird but somehow it works. I can tell you hair and eye color and type (short hair, long hair, etc) but the face is never there. So it’s a bit weird for me to look at models and actors and try to “cast” them as my characters. When I found the stock art for Grave Touched’s cover two years ago, I was struck by how much the model resembled my idea of the main character, but I’d never seen her face in my head.

I figure it’s kind of like face blindness, except with characters.

How much did the pirate pay to get his ears pierced?

Too, too much. Gold isn’t cheap these days.

Is there anything else you’d like to add about Grave Touched you haven’t had a chance to mention either here or elsewhere?

Well, Grave Touched was truly a labor of love, because I went through so much to get it out into the world. In the middle of revising the first draft (March 2013), I began having excruciating pain in my left eye that made it impossible to write or revise. So the Grave Touched’s release had to be pushed back a few times. I finally got going again, and worked my butt off to get it out this year. I wish it hadn’t taken so long, but it was necessary. I almost gave up on it, and writing, but persevered.

No one has been able to figure it out yet, and it’s been two years. I’m back to my normal writing, but I have a lot of bad days still.

It was a victory for me because I didn’t let my eye pain take away my writing or this book, and a victory for the series because I think it’s a great addition to it. And it’s slightly different. I think it’s a neat take on ghosts and possession. I had specifically wanted to explore them from a different angle. I believe I succeeded. 🙂 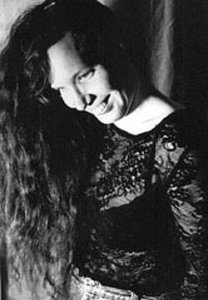 Erin Zarro is an indie novelist and poet living in Michigan. She’s married to her Prince Charming, and she has a feline child named Hailey who she’s convinced is part vampire. She loves all things scary and spooky, and is on a mission to scare herself, as nothing lately has scared her. She writes in the genres of sci-fi, fantasy, and horror. Her first published novel, Fey Touched, is a blend of sci-fi and fantasy, as is Book 2, Grave Touched. She is currently working on Book 3, Ever Touched, and is trying to stay out of trouble. Mostly. Her website is at erinzarro.com.

Thanks for dropping by, Erin!