Much of my family is scattered across the country, so I haven’t been able to visit them as often as I’d like.  When my grandmother arranged a gathering to celebrate my grandfather’s 90th birthday, I boarded a plane, looking forward to catching up with relatives I hadn’t seen in many years, including cousins I had never met before.

The trip involved a connecting flight in Detroit.

Before the plane could take off, we received word that Detroit was experiencing some sort of weather phenomenon–meteor storms or something–and that the airport there had been shut down until the apocalypse had passed.

We were forbidden to take off until that happened, so we waited on the plane while the flight attendants served beverages and tiny bags of pretzels to prevent us from resorting to cannibalism.  Some of the passengers worried they would miss their connecting flights, but the crew assured us the planes in Detroit were also grounded, and that all would be well.

When the departure window opened, we scrambled into the air, arriving in a Detroit still misty from the meteorological apocalypse that had assaulted it.

The airline canceled my connecting flight.  The gate agent directed me to the customer service desk.

Thor and the Midgard Serpent (image via comicvine.com)

On my way there, I stumbled across a line that snaked through the airport like a human Midgard Serpent–a mythical creature long enough to coil around the world and grip its own tail in its mouth, an ability which probably plays well on the talk show circuit.

“Uh…this wouldn’t be the line for the customer service desk, would it?” I asked a grim-faced man.

“Yes,” he intoned in a pronouncement of doom.

Eleven flights were canceled that day, so hundreds of people stood in a line worked by only two customer service representatives, supported by automated machines and wall-mounted telephones that were too swamped to be of any help.  The airline served warm soda and tiny bags of pretzels, but they were insufficient to ward off starvation as the hours passed.

For much of that time, we stood alongside a sliding sidewalk from which a monotonous voice endlessly repeated the same warning:

Had there been a cliff nearby, I would have flung myself to my doom to escape that voice.

By 2 a.m. I had a boarding pass for a flight departing late the next day, assuring that I would miss most of my grandfather’s birthday party.  Because weather was to blame for the flight cancellations, the airline refused to compensate me.

At least they gave me a pillow and blanket for a luxurious overnight stay at the airport.

Hunger gnawed at me.  I found vending machines.  Hooray!

But the vending machines refused to accept either money or credit card.

The other humans were either too fast for me to catch or too clever to become ensnared in my traps, so I resolved to wait until morning to eat.  Sleep was also denied me.  The chairs were designed to force people to sit upright, and the floor was so hard and uncomfortable it was like sprawling across a torture device. 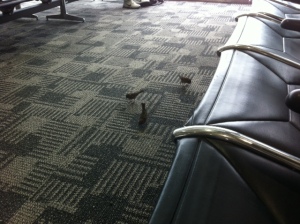 Morning came much too soon for my need to sleep, yet not early enough for my need to eat.  After powering up with a nutritious breakfast, I watched a small flock of birds darting about the inside of the terminal.

“Where were you guys during the night when I had nothing to eat?” I asked them.

Since I was no longer hungry, I tried to befriend them, but they were more interested in feasting than in friendship. 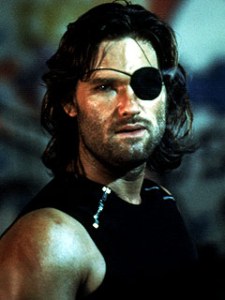 The hour of departure arrived.  Having had no sleep since 9 the previous morning, I shuffled onto the plane like an exhausted zombie.  I feared that some other complication would delay me further, causing me to miss my grandfather’s birthday party entirely.

But the plane departed on time, and just like Snake Plissken, I made my escape from Detroit–not that the airport there is that bad, as far as airports go.

A quick shower cleansed two days worth of airport from my flesh and revitalized me enough to make it to my grandfather’s birthday party as dinner was wrapping up.

When I arrived, people cheered, applauded, and hugged me.  It was like walking into a room full of instant love.

Family is pretty special.  The trip was worth it in the end.

Have apocalyptic meteor storms stranded you in an airport with only a tiny bag of peanuts to ward off starvation?  Have unforeseen circumstances stood between you and reunion with your family?

38 thoughts on “Escape From Detroit”