But first, a word from this post’s sponsor:

I used Grammarly to grammar check this post, because only zombies and bandit-survivors of the nuclear apocalypse have no need for proper grammar.

Don’t be a zombie or a bandit-survivor of the nuclear apocalypse.

A Bouquet of Pencils
PD image via Pixabay

As part of my continuing exploits as a middle-aged college student, I took an English class, which reacquainted me with the writing of academic papers.  They conformed to the same basic structure, one which worked well when destiny later demanded I write a scientific research paper for a biology class.

Now I will share this powerful knowledge with my blog followers.

Yes, both of you.

No, not the kind of introduction where you’re like, “Hi, my name is Hercules and I’m a legendary hero.  It’s a pleasure for you to meet me.”

Instead, the introduction lays the groundwork for the paper.  It might include an amusing anecdote, an attention grabber, important background information, or other wondrous and informative possibilities.

One thing the introduction MUST include is a thesis statement, which outlines the paper’s main points and indicates the overall stance the author will take.

No, not the kind of body that could turn into a zombie when you’re not looking.

The body of an academic paper presents the main points, with supporting arguments and explanations to back them up.  If writing a research paper, it should contain properly-cited quotations plundered from an authorized repository of human knowledge, such as a library or the internet. 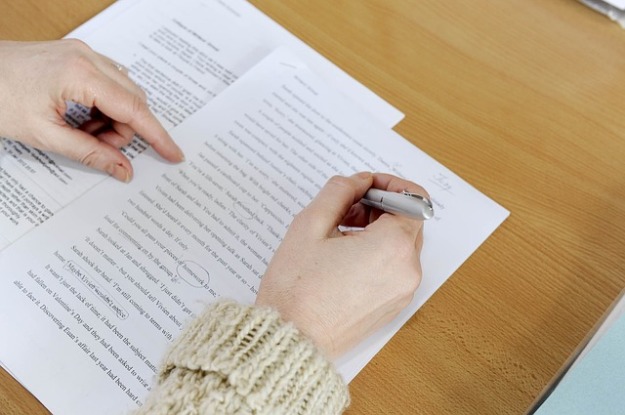 The Hands of a Writer at Work
PD image via Pixabay

No, not the kind of conclusion that ends with a cliffhanger, like when a galactic bounty hunter escapes with a scruffy-looking nerf herder frozen in carbonite, and the teacher has to wait three years to find out what happens next.

In a proper conclusion, the writer generally repeats the thesis and main points, but using different words to create the illusion of exciting new content.  The best papers often end with an insightful piece of wisdom, promising calamity if humankind ignores the grim warning contained within.

Now for an example…

The Friendship of the Dead

Since George A. Romero’s classic film, Night of the Living Dead, appeared in 1968, zombies have shambled and devoured their way into popularity.  Today, one cannot throw a stick in a random direction inside a bookstore without toppling a pyramid of zombie novels, and zombie movies continue to spread through theaters, much like the contagions they depict.  Cities across the nation host regular “zombie walks,” festive gatherings where participants dress as their favorite zombies for entertainment and charitable purposes.  Despite their iconic status, zombies lack personal hygiene as well as social grace, ensuring they make terrible friends for the living.

Zombies ignore their grooming needs.  When the living start their day, they put on clean clothes, brush their teeth, and comb their hair.  Zombies do none of these things, no matter how many days, weeks, or months shuffle past them.  Their lack of personal maintenance often results in unfortunate skin conditions requiring an ointment, yet even then, they cannot trouble themselves with a minimum level of care.  As a result, zombies fail to look their best when taking them out to dinner for the evening.

Once at the restaurant, zombies reveal their astounding lack of manners.  If they do not bite the server, they use the wrong fork with their entree, assuming they bother with silverware at all.  Zombies often eat with their fingers, despite how poorly this works with soup and pie, while their hampered social acuity blinds them to the scandalized stares they draw from the restaurant’s other customers.  They spurn the after-dinner mint no matter how much they might need one, and they never offer to pick up the check, nor do they chip in for gas on the way home after yet another dining fiasco.

Though zombies find many fans among the living, their failure to pursue effective beauty regimens, along with their insufficient social skills, make them poor choices for meaningful friendship.  Their popularity endures despite these shortcomings, but what of the danger in continuing to hold them in such high regard?  The next time the living attend a zombie walk, they might fail to tell the difference between real zombies and themselves and not even realize their mistake until their dinner guests stick them with the check at the restaurant, leaving them without enough gas money to get home.  What fate for the living then?

I Like This Picture of a Chef
PD image via Pixabay

23 thoughts on “How to Write an Academic Paper (with Zombies!)”