In the tradition of the recently-renamed Curse of the Devil-Possum–now with provocative photo illustration–comes another horrifying tale of an invader from another world.  Read on, gentle blog visitor… 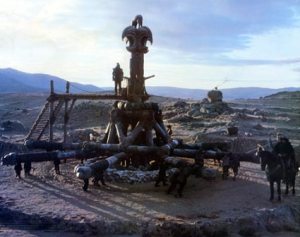 image via The Cimmerian

One Saturday afternoon I sat in my office at work, toiling at my desk.  Out in the hallway, a thing darted through the air past my door.

I looked up.  What was that?  Some kind of flying organism?

But having work I wanted to finish before going home, I shoved my curiosity aside and began toiling once more.  And once more, the Thing in the Hallway™ darted past my door, this time in the other direction.

I looked up again.  Definitely an organism.  Oh, well…work to do…

…and I returned to my toiling.  Just as I was finishing, the Thing in the Hallway™ streaked past my door again.

I looked up a third time.  It must be a bird or a winged raptor or something.

Since I was ready to go home, I went to investigate.  The hallway ended in a glass door to the outer world.  Perhaps I could use it to release the bird to the freedom of the open sky.

In the shadows farther down the hallway, a brown bird waddled along the floor, its wings draped to either side.

As I drew closer to it, cosmic horror threatened to engulf me.  No mere bird had heaved its quivering mass from the obscenity of its dark dimension to encroach upon my sanity.

Mother of All Things That Have Mothers! 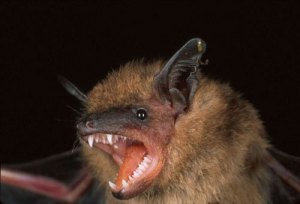 Tentacles of soul-blasting horror reached for me and I fled, staggering into the vastness of the cubicle farm.  Few people toiled at their desks, but my relieved gaze fell upon John.

He blinked at me in confusion.  “Uh…what?”

“Yeah, there’s a bat in the hallway by my office.  Come check it out.”

Pushing himself to his feet, he followed me to witness the otherworldly horror for himself.

Meanwhile, in the shadows of the hallway…

The prey…I sense them.  They come.  A sacrifice of flesh and souls I will wash down with blood and pick from my teeth with splintered bones, as recommended by 4 out of 5 dentists of the Great Old Ones…

John and I rounded the corner.

The bat descended upon us, leathery wings beating the air, jaws wide and dripping in anticipation of juicy flesh and souls. Time collapsed into a slow-motion chaos of visible sound.  We bent backwards, mirror-shades gleaming, trench coats fluttering around us, and dodged the bat like we were in The Matrix…

…except with more frightened screaming and flailing of limbs.

When the horror receded into the darkness which spawned it, we turned toward the cube farm, pale and trembling. 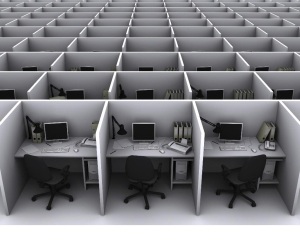 image via NIFS For Fitness

“What if it’s taken human form?”

A grim silence fell between us.

Stalking through the shadows, we found the bat in one of the cubes, clinging to a wall beneath the desk.  We decided to catch it and release it outside.

From his cube, John retrieved a long-sleeved flannel shirt in a casually-stylish pattern that offered luxurious comfort for the bat.  He armed himself with the shirt and prepared to descend into the depths of the cube.

I positioned myself on the other side of the wall from which hung the bat.  Perhaps the creature would be more likely to embrace the shirt if I could trick it into thinking that vengeful spirits haunted its new domain.

When we were ready, I manipulated the cube wall and made spooky ghost sounds.  “OoOOoOOoOoOoOOoOoooOOOoOoOoo!”

“Got it.” John stood, carefully holding the shirt.  “I got the bat.”

“Excellent,” I said.  “Let’s set him free outside and name him Mister Flappy.”

So we set him free outside and named him Mister Flappy.

Though drops of rain began to fall around him, Mister Flappy did not rise from the earth right away.  John and I watched him through the door, concerned we had injured him and that the vengeful claws of his kind might drag us screaming into a realm of unrelenting madness and horror.

Then with a roar of wild, exultant joy, Mister Flappy hurled himself up to the stars…

…and vanished in the darkness among them.

Have you ever helped out an animal when it needed a little boost?  Have you fed or adopted a stray, or simply shown the lost how to find their way back to the outer world?